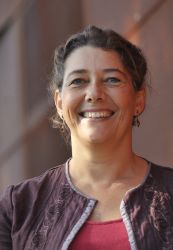 completed her study of the Science of Human Movement at the Free University of Amsterdam in 1989. She works as a psychomotor therapist in mental health care. She is also a teacher of MBSR, MBCT and Breathworks. She has a background in the martial arts (Aikido) and became a practitioner of Vipassana in 2001. She trained as an MBSR teacher at the Center for Mindfulness (CFM) in the U.S. In 2004 and 2005. Continuing her development as an MBCT teacher, she participated in the Advanced-Training for MBCT offered by the University of Bangor in 2008. She acted as senior teacher and assessor during a multi-clinic study on MBCT by Radboud University. Since 2006 she has been on the faculty of the Institute for Mindfulness in Rolde, NL. as a trainer of MBSR and MBCT teachers. She completed her formal training as a supervisor at the British Centre for Supervision and Team Development in 2013. Her involvement in psychosomatics led her to train as a teacher of Breathworks. Currently she serves as a Breathworks associate for The Netherlands and as a trainer and supervisor for the British Breathworks Organization.